Grab recently celebrated their fifth anniversary milestone on 5th June 2017. They have also launched a “Moving SEA Together” report, highlighting the company’s growth across Southeast Asia. I had been following on their progress and expansion in the past year since Echelon Asia Summit 2016 and got to know them more from then on. Their progress, updates and expansion are pretty remarkable and amazing in this short period of time. From my coverage of Grab after Echelon Asia Summit 2016, I shared a few of their updates, progress and expansion over this period of time.

Grab today has up to 2.5 million rides daily, the largest ride-hailing platform, thus making them the preferred app for drivers and passengers use in Southeast Asia. Grab is now in 55 cities across Southeast Asia and their app has been downloaded onto over 45 million devices, a growth of 3X from June 2016.

The expansion of Grab goes beyond ride hailing, with their build up of their consumer platform that encompasses transport and mobile payments. GrabPay, their proprietary mobile payments solution is projected to grow even bigger than before. This expansion would be a very interesting development and I am keen to observe how fast and far it can grow.

A new service, born from Grab business innovation, that digitises the street hailing experience. This new service would first be available in Jakarta, passengers can flag down a GrabBike driver on the street, book a ride with the same driver immediately and pay via the Grab app.

I would like to share the following key information and details from their “Moving SEA Together” report:

“As Grab’s business has grown, the scale of problems we are solving has grown with it. We are an active contributor to solving Southeast Asia’s fundamental issues: congestion, jobs, trust in and access to the digital economy. These issues affect SEA’s long-term economic growth and Grab is very much committed to investing in our region. The only way to make meaningful long-term impact is to be laser focused on the important, everyday services to consumers: a more efficient transport network and wider access to cashless payments.

The ‘Moving SEA Together’ report is so meaningful to my co-founder Ling and I, because it affirms our belief that a homegrown startup can make a difference in the world, as long as we focus on doing the right thing. Every decision we make is guided by how best we can solve a local problem, and how it will benefit people and the wider community. We’ve been blessed with help from so many people – fellow Grabbers, drivers, agents, customers and investors – who put their faith in us, and encouraged us to always work towards big audacious goals. You can call us crazy, but perhaps Grab is a place for people who believe that what they do will improve lives through technology,” said Anthony Tan, Group CEO and Co-founder, Grab.

The ‘Moving SEA Together’ report shows how Grab has built a track record of solving local problems over the last five years, and changed its drivers’ and passengers’ lives in meaningful ways.

On average, Grab commuters reach their destinations in less than half the time (52% reduction in travel time on average) compared to public transport options in their cities. The greatest time-savings come from the Philippines (70% reduction in travel times) and Indonesia (64%), with both countries having thriving – yet highly congested – capital cities. With Grab’s new GrabNow service, passengers can shave even more time off their commute.

Grab has also made commuting safer for its millions of passengers by consistently raising the bar for safety in the ride-hailing space. Grab traffic accident rates are on average 5 times lower than the country average, with those numbers jumping up to 6 times safer in Vietnam and Malaysia. This focus on making transport more convenient and safer in SEA’s rapidly developing cities has resonated with people, with the number of Grab app downloads growing 360% year-on-year since 2013.

Grab driver-partners earn on average one-third (32%) more on a per hour basis compared to average worker wages across all of Grab’s markets. Driver-partner incomes have been strongest in Vietnam (55% more than average wages), Malaysia (48%) and the Philippines (35%). With 70% of Southeast Asians still lacking basic internet access[1], the Grab app with Grab micro financed phones made it possible for many driver-partners to first experience the power of the internet – bridging the digital divide. Grab has assisted in opening bank accounts for more than two-thirds of its driver-partners (640,000 people), introducing them to banking and other financial services for the very first time in their lives.

Nearly 1 million driver partners (more than 930,000) now rely on the Grab platform for income to their families. The number of drivers has grown 340% year-on-year since 2013. In Indonesia, year-on-year growth stands at a whopping 574%.

Increasingly, Grab is broadening its services to new modes of transportation that cater to moving groups of people together, such as carpooling options which bring down fares of point-to-point travel. These options will be key to solving issues of congestion and pollution in Southeast Asia’s megacities. Its carpooling options GrabShare and GrabHitch have already started easing congestion and reducing air pollution. Grab saves an estimated almost 3.2 million kilograms in carbon emissions every year, by offering carpooling options and further optimising our booking system. This is equivalent to the amount of CO2 emitted by desk lights for 9,268 children to study in a year – and that’s assuming they keep the lights on 24/7!

Moving ahead for Grab in the near future

Grab is expanding their telematics initiative (initial purpose was to reduce speeding) beyond monitoring speeding and looking into indicators for safe driving, hard braking, sudden acceleration and dangerous swerving. Combining machine learning and predictive analytics, this would greatly enhance Grab drivers driving more safely with weekly reports of their safety scores to them. This is currently launched in Singapore and will be progressively rolled out to other countries in the region. If you are a Grab customer, this would be of great news to you!

A messaging service that has helped and impacted both Grab drivers and passengers. 8 in 10 passengers cancel less when they use GrabChat, as they can easily inform their driver on where they are using template messages like “I’m here” or “Ok coming over now”.

This would be great news for passengers traveling to different countries in Southeast Asia and wanting to book a Grab ride. Grab now has auto-translation of template messages in 5 languages (Bahasa Indonesia, Bahasa Melayu, Simplified Chinese, Thai, and Vietnamese), to cater to regional travellers. 80% of all GrabChat messages already use the template text messages, which ensures safe, one-tap texting for drivers.

On Grab 5th Anniversary milestone, they have grew and expanded a lot, along with innovation, solving problems and coming up with innovative solutions along their journey. Congrats to Grab on your 5th Anniversary, looking forward to more updates, developments, growth and expansion news! 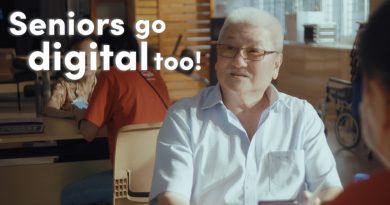 Seniors go digital too with Singtel!

Let’s All Help This Feisty Princess !