The Singtel Group organised “The 5-Min Video Challenge”, celebrating filmmaking talent in Asia as well as a content push by the Singtel Group. The theme for this year 2017 is “Connecting Lives”. The 5-Min Video Challenge attracted quite a number of videos submissions from Australia, Gabon, Indonesia, the Philippines, Singapore and Thailand. There were a number of different genres from comedy, romance, drama and life stories from the videos submissions.

For each respective country, two finalists from each of the six countries were chosen by lcoal judges to compete in the regional finals. Thereafter, there was a regional judging panel that chose the Grand Winner and runner-up.

On 22nd November 2017, the finalists came down to Singapore for the regional fianls and the crowning of the Grand Winner of The 5-Min Video Challenge organised by Singtel Group. Watching the video clips of the finalists at the media event, followed by the media interview. I had a wonderful time watching some amazing short films/videos produced by talented filmmakers from the region, some were very touching, their cinematography style that I relate to quite closely.

The regional judges were impressed with the regional finalists for this year 2017 “The 5-Min Video Challenge”.

Mr Khoo, who returned as a judge for the second year, said, “We were wowed by the great improvement in the short videos this year. The winning works really spoke to us and we look forward to working with some these talented filmmakers.” He advised aspiring filmmakers to hone their craft by continuously filming and finding new ways to tell a story even with their smart phones.

“The 5-Min Video Challenge” is both a celebration of the filmmaking talent in Asia and a content push by the Group. Centred on the theme “Connecting Lives” this year, it attracted hundreds of video submissions from Australia, Gabon, Indonesia, the Philippines, Singapore and Thailand. The videos submitted spanned a range of genres from comedy, romance to drama and slice of life.

Mr Arthur Lang, Chief Executive Officer, International Group, Singtel, said, “We’re impressed by the different perspectives presented in the short videos that inspired, challenged and entertained us. As Asia’s leading communications technology group and a long-time supporter of the arts, we want to support the creative talent in the region and quality original content that our customers enjoy. Many of us today look for content that is mobile-friendly, authentic and connects with the heart. I strongly believe the finalist entries have all achieved these. We’re honoured to recognise them.”

Listening to the words, views and thoughts of the regional judging panel headed by award-winning Singapore filmmaker Mr Eric Khoo and comprising Mr Aaron Lea (Australia), Mr Joko Anwar (Indonesia), Mr Serge Abessolo (Gabon), Mr Quark Henares (the Philippines) and Mr Thitipong Kerdtongtawee (Thailand). This was an eye-opener for me personally; I had a better understanding of producing videos/films/content from both sides of the story, from the filmmakers/producers/writers to the judges/clients/end consumers. I was involved a recent behind the scenes photo shoot for my friends short film/videos project, therefore, I began to appreciate filmmaking and cinematography in the short films industry, from a consumer perspective and content producer perspective.

After watching the videos submissions by the finalists and listening to the media press conference, the finalists and guests proceed to the ballroom for the awards announcement and prize presentation. Of all the finalists, I had some personal favourite videos/films submission, do visit The 5-Min Video Challenge YouTube account and check out the regional finalists 2017 playlist! 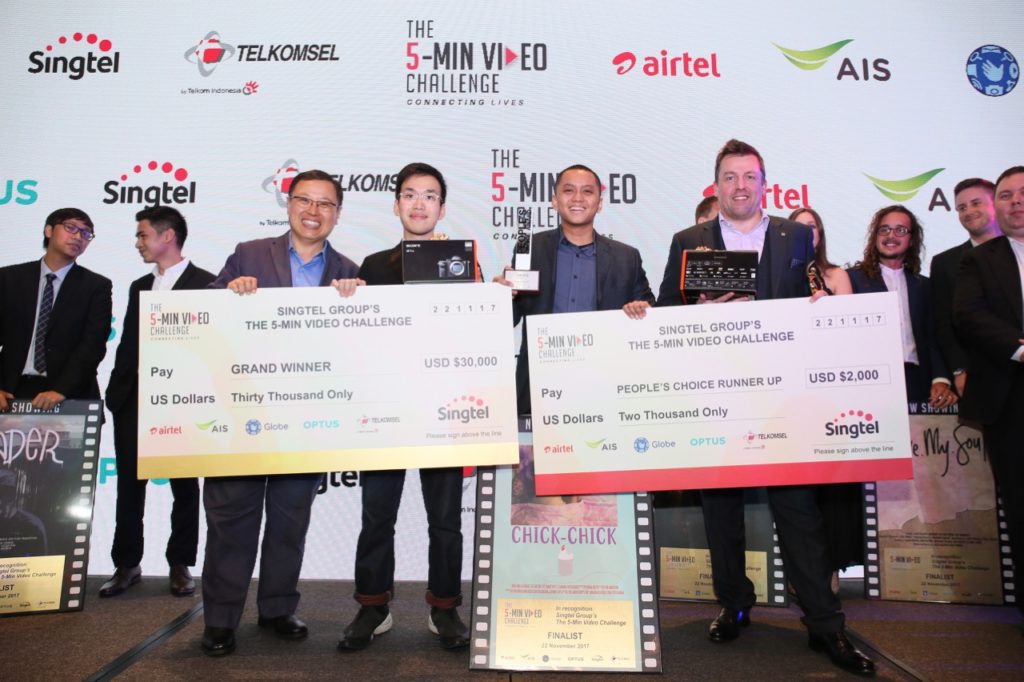 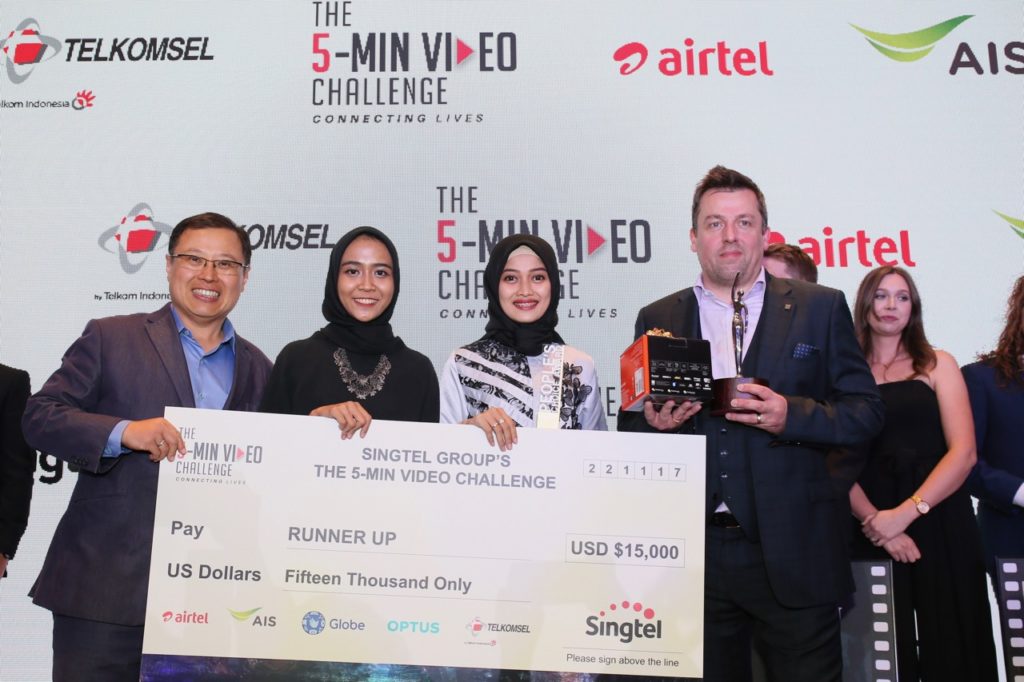 Alright, have you watched all the videos/films submissions by all the Regional Finalists? This year’s 2017 The 5-Min Video Challenge were won by the Indonesians, the Grand Winner and runner up. Firstly, let’s view their videos submssions:

Chick Chick tells the story of a young girl who befriends a chicken. Her attempts to communicate with the chicken, inspires her to try and reconnect her fighting parents with a tin-can phone.

The runner-up Sowan follows a man who travels to various places on his motorbike. He hears about recent agricultural issues and discovers the conflicts among farmers, middlemen and sellers.

With the announcement of the Grand Winner, runner up and finalists, we hope to see more of their works and videos on each of Singtel Group member’s mobile and video platforms, allowing them to reach a 670 million strong audience across Asia, Australia and Africa.

I would like to thank Singtel Singapore for the invitation to Singtel Group’s “The 5-Min Video Challenge” regional finals awards event.