The sponsorship is in line with Epson’s corporate social responsibility (CSR) outreach efforts to give back to the community, promote football through technology, and engage its customers and partners via high-profile platforms.

“Epson has always found ways to give back to the community that has provided us with so much,” says Mr Koichi Endo, Managing Director, Epson Regional. “This match is a chance to fly our local colours and show off the skills of our team as they face off against one of Europe’s best. I am confident that while they will learn much from Juventus Football Club, they will also teach them a few new tricks!”

The sponsorship, which starts with immediate effect, will see Epson support the live match as well as a series of fringe engagement activities with its imaging and printing equipment. Members of the public will stand a chance to win live match tickets and attractive memorabilia through Epson’s promotional activities, to be rolled out between late June and September.

Said Ms Tan May Lin, General Manager, Epson Singapore (Sales Division), “Football is the world’s and Singapore’s most popular sport, and is close to the heart of Epson. We are delighted to help raise the football interest and excitement here in Singapore with the opportunity for one of Europe’s most successful football clubs and our very own Singapore team to face off and glean pointers. With the friendly match and series of engagement activities, we hope more people can appreciate and enjoy the sport through Epson.”

More information about Epson and its products are available on www.epson.com.sg.

Football fanatics around the world are eagerly looking forward to the biggest football action in the world, the holy grail of world football, to be crowned world football champion for the next four years. World Cup 2014 is coming very soon in a week’s time on 12th June 2014 in Brazil! In Singapore, we are a football mad nation and besides supporting our very own home team, the Lions, we all as football fanatics, also support another international team! The 32 teams participating in FIFA World Cup 2014 have their own social media tools and platforms to engage and update their supporters! Are you ready for FIFA World Cup 2014 action not just on television and also on Twitter?

I am a Liverpool FC fan and I personally have a curated Twitter List titled Liverpool FC giving me news, updates, rumours, sharing, stories and even live match action tweets! Reading and catching the football action on Twitter timeline can be a fun thing too, even though nothing beats watching it live! There are times when we can’t catch the match live on television, following and reading football action on Twitter timeline can be just as exciting and even overwhelming if there are many football fans tweeting and sharing, all united by a common hashtag!

Twitter Singapore shared with us on the upcoming FIFA World Cup 2014, on how to catch the action on Twitter and they also prepared a comprehensive list of Twitter accounts/handle for us football fanatics to follow! I am going to bookmark #WorldCup on my HootSuite Twitter App and I am prepared for fast and furious flow of FIFA #WorldCup 2014 tweets, actions, updates! Here are some on the How-To-Follow guide on #WorldCup 2014 on Twitter, before that, a football trivia – Who would be in your Twitter XI Dream Team ?

If Twitter users were picking their starting lineup, the eleven players below would be a good place to start. This team is made up of the most-mentioned player Twitter @handles in the past three months, forming an XI that would surely be the envy of any manager in football: 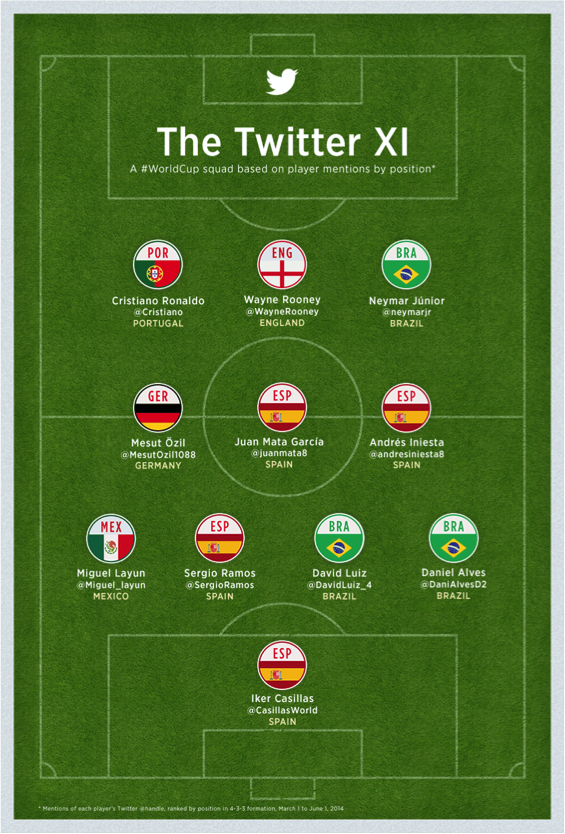 Thirty of the 32 nations competing in this year’s World Cup have official accounts on Twitter. You can follow all thirty here; this graphic shows the top six most followed teams: 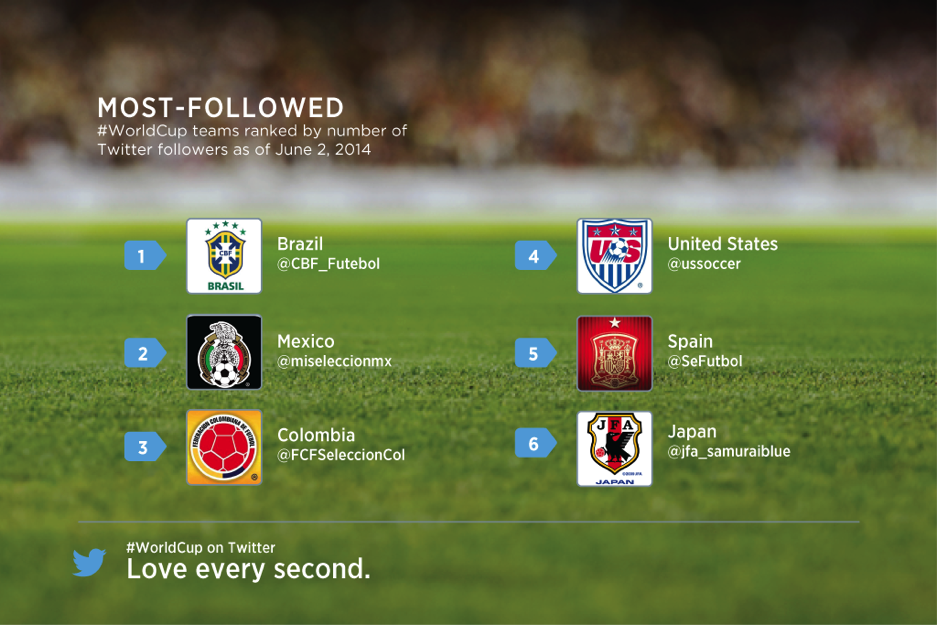 More than 300 of the players from the 32 competing nations are on Twitter, with representatives of all the competing teams having a presence on the platform – follow them here. The top six most followed players at the 2014 World Cup are 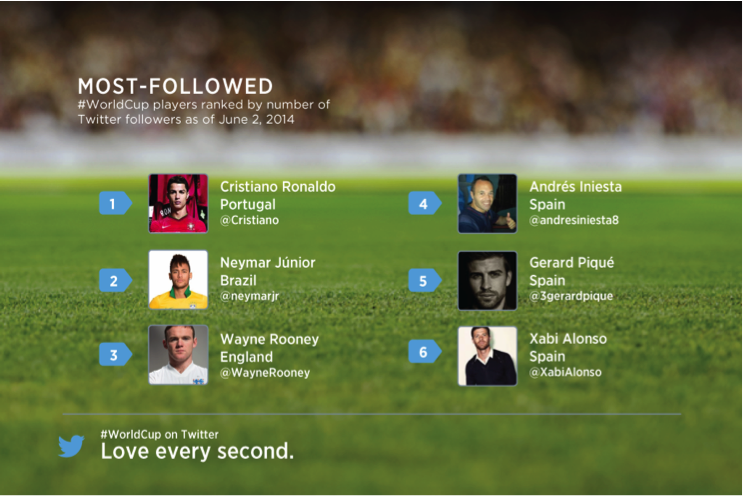 Twitter and football go hand-in-hand – seven of the ten most talked-about moments on Twitter in 2013 were related to football. So Singaporean fans can easily use Twitter to follow their favorite country teams and players during the #WorldCup. Here are some interesting Tweets related to the FIFA World Cup from the start of the year to now:

Twitter is increasingly used as a tool for breaking news and sharing of exclusive content. Many of the country teams announced their initial and final rosters first on Twitter before anywhere else. In fact, 45% of football fans in Singapore said that news breaks fastest on Twitter:

The official hashtags for the 2014 World Cup are #WorldCup and #Brazil2014. Hashtags join conversations together on Twitter, so follow along to keep close to the action, or use them in your own Tweets to join the global conversation.

To be sure you’re receiving the most reliable, up-to-the-minute World Cup news, this selection of verified accounts is a great place to start. You’ll see real-time updates from organisations including:

When big events happen in the real world, they happen on Twitter, too – and never is that truer than with big televised sporting events. For sports fans watching the match, Twitter is the second screen to TV broadcast. It creates a space for live commentary in the moment, from fans and experts alike, across sports. Recent global research from @Nielsen reveals that:

In Singapore specifically, research from @globalwebindex shows that Twitter is the perfect companion for World Cup 2014:

The FIFA World Cup 2014 will take place from June 12th to July 13th, with the opening match in Sao Paolo between Brazil and Croatia. So be sure to tune in with Twitter for real-time updates on all the action for the 64 matches – track every match, experience every goal, and hear the roar of the crowd. All the drama of #Brazil2014 will unfold on the pitch, but also on Twitter, so you can find fellow fans, follow your team, and love every second of the World Cup on Twitter.

Alright, football fanatics, time to add in all the FIFA #WorldCup 2014 team official twitter handles and your favourite World Cup football players into your twitter application! Remember to add your #WorldCup hashtag and you can start to feel the sambal football action!

As part of the SG Game On! Ultimate Selfie Challenge, Manchester football rivals, Rio Ferdinand and Sergio Agüero, will take selfies on May 15 while engaging in four activities that are popular with Singaporeans.

The footballers will then post their selfies on their own Twitter pages and encourage their fans to retweet them. The player with the most number of retweets will win.

In addition, the football stars have picked Han Boy Ming for suggesting the most interesting selfies on Twitter through #SGGameOn. He and a friend will join both footballers for dinner on May 15.

Ferdinand has issued a friendly challenge to Agüero via a video released today. Click here to view:  www.singtel.com/gameon.

Challenge accepted! Sergio Aguero has responded to Rio Ferdinand’s challenge via a video for SG Game On!.

Dinner with Fans on May 15

Four lucky SingTel customers who purchased the Samsung GALAXY S5 LTE from April 11 to May 8 will win a dinner for themselves and a friend with the two football stars. The winners will be announced on May 13 at www.singtel.com/gameon.

The Football Carnival on May 16

The footballers will put their knowledge and skills to the test and thrill fans in a series of football-themed challenges at a street carnival event. Fans can also enjoy exclusive privileges on SingTel products and services at the carnival.

* Information and details Courtesy of SingTel and Ogilvy Public Relations *

SingTel and Samsung to bring Manchester Rivals Rio Ferdinand and Sergio Agüero to Singapore on 15th May and 16th May 2014! 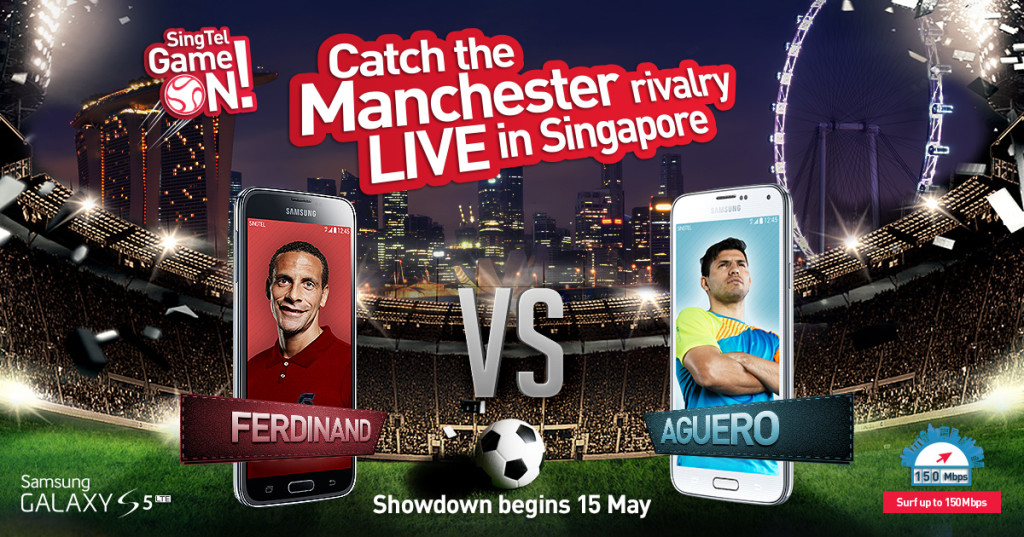 Singapore will get a taste of Manchester’s fierce football rivalry when SingTel and Samsung bring megastars of the beautiful game, Rio Ferdinand and Sergio Agüero, to town on May 15 and 16.

Rivals on and off the pitch, the world-class footballers will face-off in the SingTel Game On! challenge, a unique two-day contest that aims to celebrate Singapore’s passion for football in the leadup to the 2014 FIFA World CupTM. The event is part of SingTel’s regional partnership with Samsung, which was recently launched together with the highly anticipated GALAXY S5 LTE.

Four lucky SingTel customers who purchase the GALAXY S5 LTE from April 11 to May 8 will win a dinner for themselves and a friend with the two football stars. Customers who purchased the handset can also get player autographs at a football carnival event on May 16 on a first-come-first-served basis.

“At SingTel, we are always looking for ways to surprise and delight our customers with exciting new experiences and to thank them for their support. SingTel Game On! will give Singapore football fans a once-in-a-lifetime chance to get up close and personal with two of the game’s most popular players,” said Mr Johan Buse, SingTel’s Vice President of Consumer Marketing.

Ferdinand and Agüero will take each other on in the ultimate selfie challenge. Their task is to take photos of themselves with the help of a GALAXY S5 LTE phone while engaging in typical Singaporean activities as suggested by local fans via social media. For example, they could take a selfie of themselves enjoying a hawker centre meal. The footballers will then post their selfies on their own Twitter pages and encourage their fans to retweet them.  The player with the most number of retweets will win the challenge.

How fans can participate: Take a creative selfie while enjoying a popular Singaporean activity and share it via Twitter using the #SGGameOn hashtag from

April 23 to May 4. Ferdinand and Agüero will then choose their favourite selfie tweet and invite the lucky fan and a friend to join the other winners at the exclusive dinner.

The footballers will put their knowledge and skills to the test and thrill fans in a series of football-themed challenges at a street carnival event. Fans can also enjoy exclusive privileges on SingTel products and services at the carnival.

* Information and Picture Courtesy of SingTel and Ogilvy Public Relations *