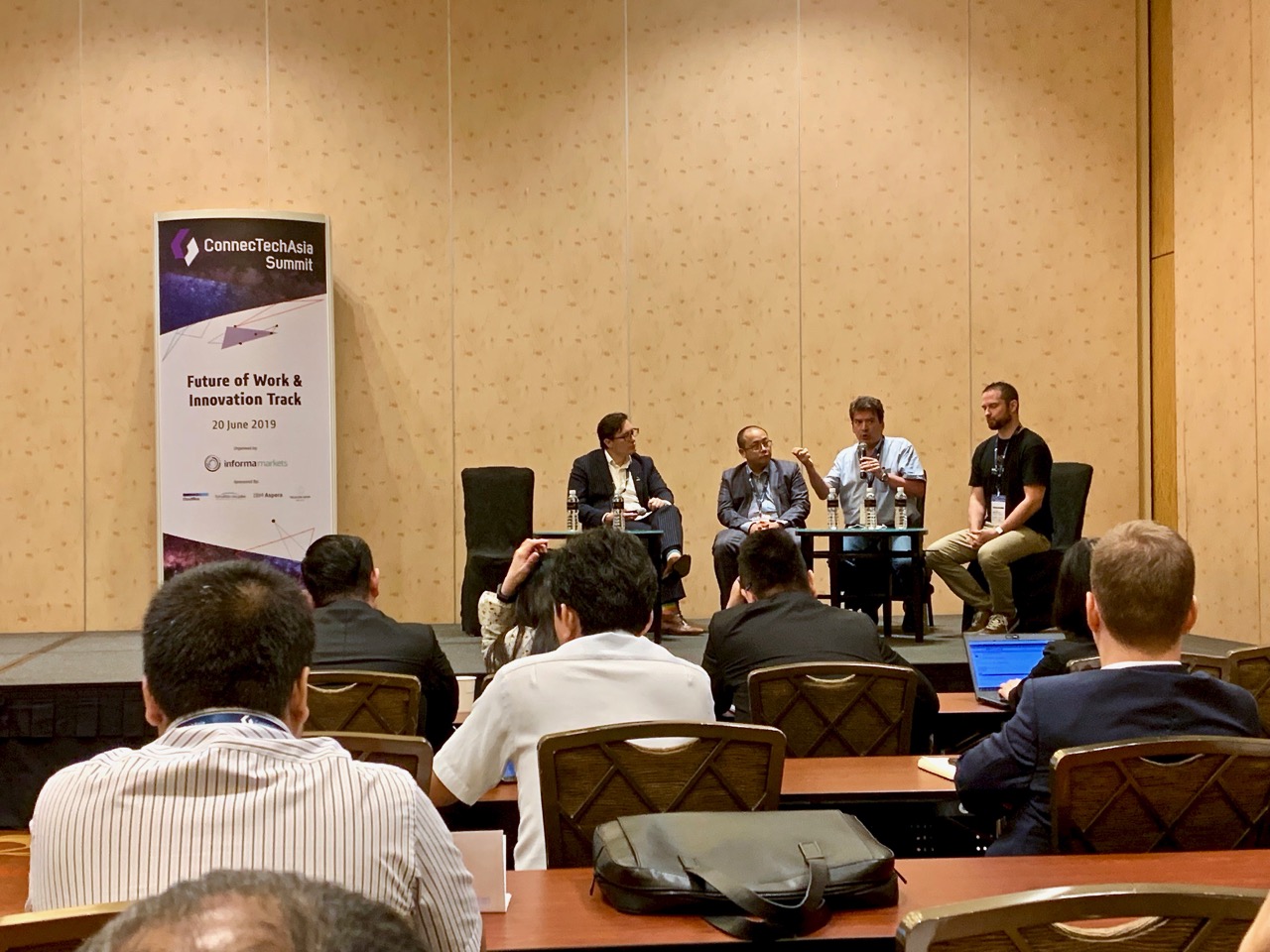 ConnectTechAsia 2019 was recently held in Singapore from 18th to 20th June 2019 at Marina Bay Sands and Suntec Convention Centre, ConnecTechAsia comprised of CommunicAsia, BroadcastAsia and NXTAsia. Besides exhibitors showcasing their latest technological products and services, there were also ConnecTechAsia Summit with an extensive and diverse range of topics being brought up for keynote address, engagement sessions, panel discussions with industry experts. One of the sessions was “Crowdsourced Threat Intelligence at ConnecTechAsia Summit 2019”.

What was this particular session all about? Let me share the details below before going into the keynote address and sharing by the panel session.

Time: 11:50am (Started later due to earlier sessions overran their schedule)

As our world becomes increasingly interconnected, the critical need for cybersecurity for protecting consumers and organizations of all industries from fraudulent transactions and malicious threats has become one of the key challenges of our era. During this discussion, executives from various industries will discuss how Blockchain security affects end users worldwide, as well as the importance of cybersecurity.

Discussion topic: Why do we need crowdsourced intelligence?

Sebastian Wahlers opened the session and led the panel discussion with the three panellists.

John Kirch spoke in-depth, brought up a number of key points on the world of internet, information technology and cybersecurity

Dr. David Nguyen gave alternative insights, making this panel discussion interesting, from the other side of the story.

Cybersecurity is not something new, it’s an area that has been around for a period of time (remember your internet security, antivirus software?) and this area is growing more significant and important in the current world of information technology developments, advancements and consumption by the businesses and masses. The amount of data available and circulating has metamorphosised into big data, followed by data crunching, analysis, reporting and applying the information derived from big data.

Although I was able to understand the discussion points on crowdsource threat intelligence and cybersecurity brought up during the panel discussion, it was pretty challenging getting the various points down into my article above. Moving forward, I would be covering on the topic of cybersecurity, do keep a lookout for my articles!

How important and useful would crowdsourced threat intelligence in this current and future world of information technology development and technology consumption? My personal humble opinion is that this would take off, with both push and pull factors coming in, to make crowdsourced threat intelligence a key segment in the overall cybersecurity field, along with the hardware and software resources in the market.

To most people, crowdsourced threat intelligence and cybersecurity is not too much of an interest/importance to them, until they lose something valuable and precious to them through a cyber threat, cyber theft or being hacked. I hope that in my future articles on cybersecurity, more people would be aware and take the necessary steps to protect themselves from cybersecurity threats.

I would like to ask a few questions, how many bank apps do you have in your smartphone? Do you have other mobile wallet payment apps as well? Do you feel that at times, even though you have those apps, they sometimes don’t “talk” to each other that well? After I met PayKey at CommunicAsia 2019, had a chat with them and learned more about PayKey’s Social Telco Solution ™, I reckon that PayKey is going to change the way we access and use financial services.

With our world today being heavily connected by smartphones and social media, there are a lot of time and activities being done on our smartphones, while on the move, at work or during our leisure time. Performing payments, banking activities are getting more common on our smartphones. The frustration for some of us would be, there might be too many mobile payment wallets used by different people, it can be a hassle and frustration when paying/transferring money from you to another person.

PayKey is the Social Telco Solution that comes into play, they fits into companies existing framework, they are not another app. They can help banks, telecommunications and e-wallets with their customer satisfaction and engagement, giving users to access key financial services on their smartphone from any app. PayKey transforms the smartphone keyboard into a new channel for financial services and communication through the various social media applications available in the market.

I was given a demonstration by PayKey at CommunicAsia 2019, on using PayKey from social media apps, making a payment to another person, without even having to open the bank’s app. Check out PayKey’s video on how their Social Telco Solution works – PayKey’s Telco Solution – As unveiled in MWC! We also had a good and interesting chat on the mobile payment space around the world, the current trends and future opportunities especially in serving those that do no have access to banking services and facilities.

PayKey’s telco solution – as unveiled in MWC! from PayKey on Vimeo.

PayKey has a number of big international banks on board, when you visit their website, you are able to view their customers on board. In Singapore, UOB is currently implementing the PayKey Social Telco Solution, in my chat with the folks from PayKey at CommunicAsia 2019, I got to learn more about their expansion progress in Singapore and I hope that their PayKey Social Telco Solution would come on board to the other banks and telecommunications companies in Singapore, in the near future!

Check out the UOB MyKey Commercial below

Check out The PayKey Story below

For more information on PayKey, check them out below

ConnecTechAsia 2019, comprising of CommunicAsia, BroadcastAsia and NXTAsia, took place in Singapore from 18th to 20th June 2019 at Marina Bay Sands and Suntec Convention Centre. Although this wasn’t my first visit to ConnecTechAsia, my previous visits over the years were through invitations by conpanies. This time however, was my first time whereby I applied for media accreditation and there was a bloggers/influencers category, making it a lot easier for folks like us, writing and publishing B2B/Enterprise technology topics to apply.

What were the key themes/topics for ConnecTechAsia 2019?

Smart cities have been a focus of governments as they meet rising challenges from growing populations, rapid urbanisation and desire to improve their citizens’ quality of life.

As industries continue to undergo digital transformation, emerging technologies such as AI, IoT, blockchain, cloud and big data are increasingly being integrated into business processes. This presents enterprises with the golden opportunity to harness new technologies to improve their efficiencies and transform into smart, digitally-first organisations.

“Thanks to TV digitisation, networking everywhere has totally transformed the TV industry including tying in social media with video on demand. 5G will only further accelerate this especially with 4K. Just like with the Internet, video will be the stimulus towards the establishment of 5G, yet there will be a larger future impact due to healthcare, gaming, automotive, AI, public transport, utilities and IoT devices,” says Stan Moote, Chief Technology Officer, IABM.

As we continue to witness the convergence of technologies that are blurring the lines between the technology, media and telecommunication sectors, ConnecTechAsia is committed to its vision of empowering businesses and helping them navigate the changes that are unfolding over the digital economy,” says Ian Roberts, Regional Executive Director – ASEAN Business, Informa Markets.

“ConnecTechAsia continues to be the regional Telecom, Media and Technology event to look out for. I look forward to engaging with industry thought leaders and companies to exchange views on emerging technological trends and how we can collectively seize new opportunities in the Digital Economy,” says Tan Kiat How, Chief Executive, Infocomm Media Development Authority.

Over the period of 3 days from 18th to 20th June, I visited BroadcastAsia, CommunicAsia and NXTAsia, with some appointments booked through pr agencies or the brands themselves to visit some of their booths.

My application to ConnectTechAsia 2019 was a writer under my technology and business portal/blog, covering B2B/Enterprise technology topics. Due to the size of the exhibitors, I wasn’t able to cover everything, I was particularly interested in NXTAsia, the future of technology, IoT, 5G. Although I didn’t reply to all the invites by pr agencies to visit booths and their exhibits at ConnecTechAsia, I do make an effort to visit and tour their exhibits/services/technology without making an appointment. I also visited this technology booth PayKey, do check them out!

The country pavilions at NXTAsia were also interesting, it’s good to know and learn more about different technological developments and services in various countries/states, I visited Korea Pavilion and State of Victoria, Australia pavilions and viewed some of their innovative technology products and services.

There was a particular summit that I attended on 20th June 2019, on Future of Work & Innovation Track, on this particular discussion topic: Crowdsourced Threat Intelligence. I would be sharing more on this topic in another article! Thanks to ConnecTechAsia, I managed to link up and have a very fruitful and informative fireside chat with Uppsala Security on cybersecurity and blockchain!

This would always suits me since I run a small proprietorship photography business, the range of photography, cinematography and broadcast showcases suited my scope of business. I visited the booths of Canon, Sony, Zhiyun, Fujifilm, Cathay Photo, SLR Revolution (for Boya) and Accedo TV. 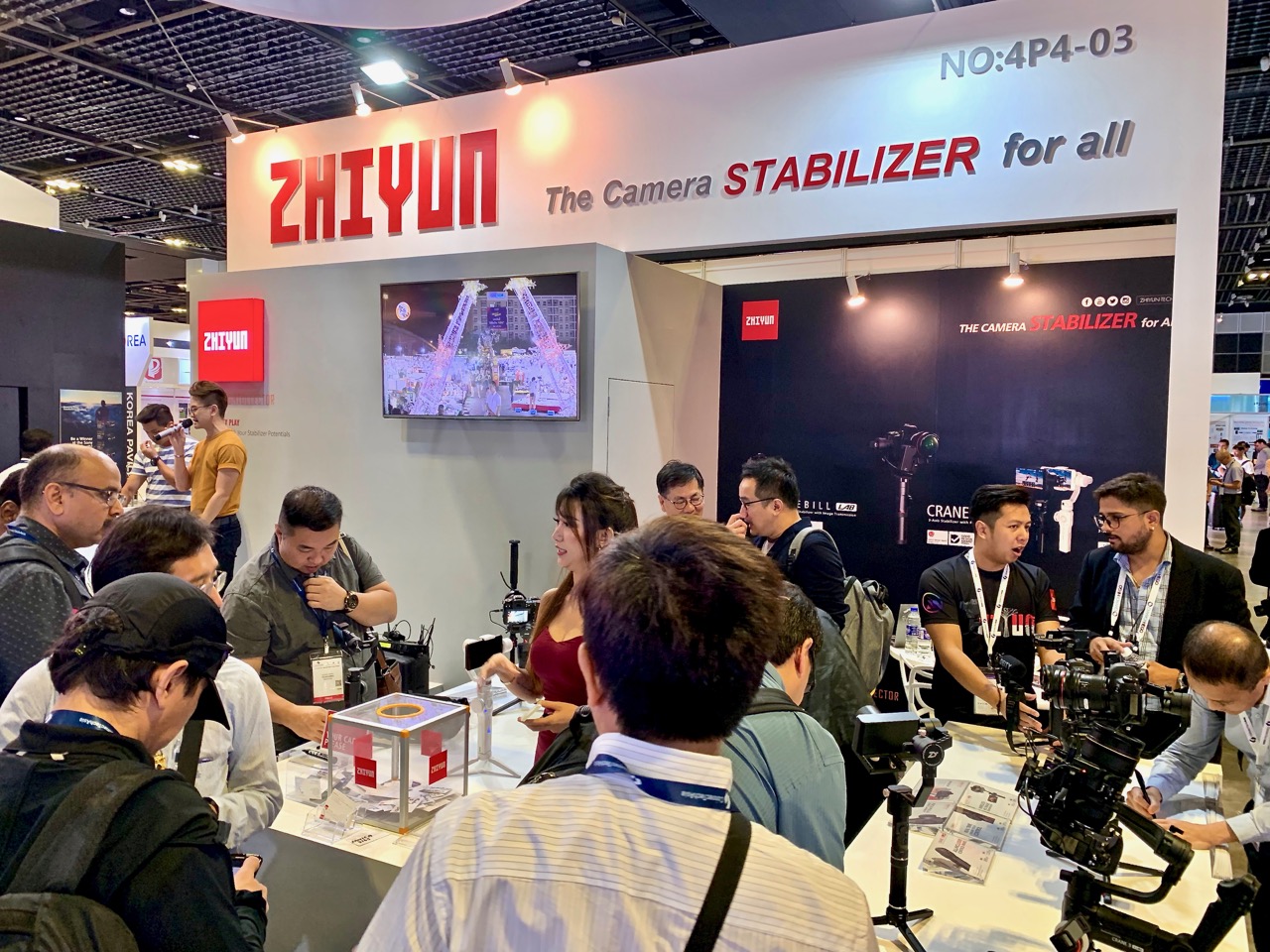 Key highlights and announcements from ConnecTechAsia 2019

There were a number of key highlights and announcements coming out from ConnecTechAsia 2019, I would share them below from the press release information received:

– Solustar’s VAL II, its smart concierge robot that gives a boost to the front-line service industry

“Esports is driving significant growth for the live entertainment sector, and is also a converging point with other industries such as media, broadcast productions, advertising, and games,” says Nicholas Khoo, Co-Founder & Chairman of Singapore’s Cybersports and Online Gaming Association. “ASEAN itself has become a significant focal point for the region with a massive uptake of smartphones and rising income levels. With emerging technologies such as 5G, VR and IoT there is a lot of potential for esport’s further growth and expansion, which is also bringing about massive opportunities for the world’s largest brands.”

Overall, I had an interesting time, visiting different booths at ConnecTechAsia, networking with some of the companies, hopefully, it would be beneficial for me on both fronts of B2B/Enterprise technology writing and photography business (both still photography and videography).

There were 38,000 attendees and 1,700 exhibitors over Marina Bay Sands and Suntec Singapore during ConnecTechAsia 2019. Due to the big scale and size of CommunicAsia, BroadcastAsia and NXTAsia under one roof of ConnecTechAsia, I was only able to cover topics closer to what I have been covering over the past few years.

Keep a lookout for some of my upcoming articles from my coverage of ConnecTechAsia 2019, from my visits to some of the booths and having a chat with them.

ConnecTechAsia returns from 9th to 11th June 2010 at Marina Bay Sands Singapore. Do mark the dates down on your calendar!