On 9th August 2009, Singapore will be celebrating her 44th Birthday, for those who manage to get the tickets into the Parade, have lots of fun and enjoy yourself ! For those who didn’t, you can get a glimpse of my NDP 2009 Preview experiences and watch it from the sides of the Esplanade, Merlion Park or Esplanade Bridge.

Come Together : Reaching Out, Reaching Up 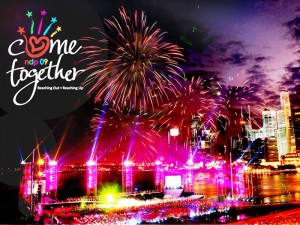 The National Day Parade Celebrations would be special and unique, putting history lessons into plays, performances and singing, about Singapore’s founding, growth and today’s success, with the following Chapters

Chapter One : What Did He See ?

Chapter Six : Against All Odds

Chapter Seven : When I Grow Up

Chapter Ten : What Do You See ?

Have a nice long weekend folks ! Have a fun celebration !